Enjoy the discovery of the North of Morocco with all its diversity....

The Andalusian Morocco Tours takes you into a region that is, still relatively, unknown of the Moroccan kingdom, where Andalusian influences are still pacing the life of small villages in occidental Rif Mountains. The mysterious Tangier, the blue Chefchaouen, but also the Royal Fes, Meknes and the capital Rabat are all waiting just for you.

Tangier has been at the center of Moroccan culture since the 5th century and remains one of the must cities to visit when you come to Morocco, it is the gate to Africa from Europe, as it is only 14km by Ferry from the south of Spain, make ideal for people who would like to combine Sapin to Morocco, or the south of Spain to the North of Morocco which have a lot of similarity and both have the Andalusian influences.

Enquire now the Andalusian Morocco Tour by filling the “GET a QUOTE” and let one of our travel experts customizing your tour.

Arrival to Tangiers; Panoramic Tours of the city and free time to rest.

Upon arrival to Tangier city you will be met and greeted by PURE MOROCCO driver. Panoramic tours of the city and transfer to your hotel; check-in and free time to rest.

After having breakfast, join your guided tour of Tangier

Visit Tangier with all of its main touristic features. Tangier has been dubbed the “city of strangers” because of its many settlements (Phoenicians, Romans, Vandals, Arabs, Portuguese, British, French and Spanish). This city is still a melting pot in which we enjoy different things from different cultures.

The guided visit will take you along the beach to enjoy what the city is famed for. Like the Kasbah, the tomb of Ibn Battouta, a 14th century famous traveller who was born in Tangier, Teatro Cervantes, the Grand Socco. the American Legation, the Tangier American Legation Museum with its Paul Bowles Wing dedicated to the writer and composer who lived most of his adult life in Tangier, and the Kasbah Museum, the former Sultan’s palace deserves to be seen not only for its collection of artifacts from the Phoenician to modern times, but also for the building and garden.

Optional Lunch in a local Restaurant

Free afternoon to discover the Tangier main town at your own.

After having breakfast in the hotel, departure to Chefchaouen through Tetouan.

A stop is planned in the city of Tetouan the last is considered to be the most Andalusian city of the kingdom of Morocco. All the neighborhoods of Tetouan belong to three different architectural styles: The Andalusian style (Medina), the Spanish style of the early and mid-twentieth century (Ensanche) and the after independence style (peripheral neighborhoods). Each style includes variations more or less important in relation to the evolution of styles and materials.

In the afternoon you will drive towards the blue City. Cut into the sides of two mountains, Chefchaouen is a city with blue and white lime-washed houses. A powerful charm that you really can feel in the Outa-el-Hammam square, in the cobblestone medina. Sat on the terrace of a cafe, you can enjoy the attractive view of the grand Tarik-Ben-Ziad mosque whose octagonal minaret is inspired by that of the Torre de Oro in Seville. This Andalousian architecture can be found in the Kasbah and its gardens, at the center of the medina. Its walls and its 11 crenellated towers, of which one used to be a dungeon, house an interesting ethnographic museum.

Visite of the main touristic features of the city.

Breakfat and Departure to Fès via Meknes.

Tours of Volubilis and Meknes

Meknes is an Imperial capital founded in the 17th century by the Alaouite sultan Moulay Ismaël who decided to make Meknes one of the most beautiful and powerful Imperial cities in Morocco. And still today, protected by around 40km of walls. Its medina and the remains of the royal palace earned Meknès a place on Unesco’s world heritage list.

Considered to be one of the most beautiful gates in the world, Bab Mansour was constructed at the beginning of the 18th century. It is the entrance to the Imperial city proper, where a visit to the sultan’s mausoleum is still of interest.

Meknes has one of the busiest medinas in Morocco. The Place El-Hedime, located exactly between the old town and the Imperial part of the city, houses the covered market and becomes busy at dusk: fire-swallowers, storytellers, animal trainers and jugglers create an atmosphere different from anything you are used to.

The largest Roman archeological site in Morocco lies 31km north of Meknes: Volubilis. Triumphal arch, capitol building, house of Bacchus – everything testifies to the city’s splendor and its economical and political weight. Not to mention the moving delicacy of the mosaics. Allow at least two hours to discover this open-air treasure.

Moulay Idriss Zerhoun is the most important pilgrimage town in Morocco. Here lies the tomb of Moulay Idriss I, the founder of the Idrissid Dynasty and great-grandson of the prophetMohammed.
The town has a spectacular setting, with its whitewashed houses straddled over (and between) two green hilltops.

After breakfast at your hotel, enjoy your Fez Full day City tour.

The imperial city of Fes is the city that most reflects the ancestral past of the Moroccan kingdom and its ancient civilization. It was and still remains the core of the intellectual and spiritual creativity, not only in Morocco, but also in the Islamic world. Fes houses the oldest university in the world, Al Quaraouiyyne and its ancient medina was classified as Universal Heritage by UNESCO in 1981.

The medina: Traditionally your exploration of the medina should start at the Bab Boujlloud Gate. The first monument to visit is the vast Bou Inania medersa. As you continue along Talaa Kebira Street (big climb), you will particularly admire the Tijani zaouïa (zaouïa, sanctuary of a religious brotherhood) and the instrument makers’ souk before arriving at the mzara (shrine) of the ancient sovereign Moulay Idriss situated at the place where he took the decision to build the town. Once you have passed the babouche vendors, you arrive in En-Nejjarine Square and the cabinetmakers’ souk. The magnificent carved foundouk (caravanserai) on the square houses the Museum of Wooden Arts and Crafts. The kissaria (covered market), where jewellery and fine fabrics are on sold, is nearby (it is shut at night). Next to it, you can admire the most visited and revered attraction in Fès: the zaouïa of Moulay Idriss, founder of the town. Your walk continues on to Es-Seffarine Square, the coppersmith square, and then to the tanners’ quarter situated just before the Andalusian quarter with its mosque and the Es-Sahrij medersa.

Medresas: A Medersa is a school where the Koran is taught along with all the classic subject of learning: mathematics, grammar, history, astronomy, medicine… In Morocco, and especially in Fès, medersas have the important role of integrating students from other regions. Generally they are built around a central courtyard with a fountain.

El-Attarine : The Merenids built this masterpiece between 1323 and 1325. Its central courtyard is magnificently decorated. Its walls are covered with sura engraved in wood or plaster. The fountain and marble columns are embellished with zellige (tiled mosaic).

Bou Inania : This Medersa, built between 1350 and 1357, is the biggest in Fès . Pass through the magnificent entrance with its heavy copper work doors, and then be impressed by the abundance of earthenware, the refinement of the sculptured wood and plaster and the chiselled stalactites called mukarnas, the hallmark of Merenid architecture. A canopy of typical Fès green tiles surmounts the onyx and marble courtyard.

After having breakfast at your hotel, departure via the Highway to Rabat, the Capital of Morocco.

Rabat is one of the four imperial cities of Morooco. A set of sites in this city is inscribed on the World Heritage List of UNESCO : the “new town” (built at the beginning of the French protectorate in Morocco), the Kasbah Oudayas, the Testing garden, the medina ramparts and Almohad gates, site of Chellah Hassan mosque (Hassan Tower), the Mohammed V mausoleum and habous neighborhood near Diour Jamaa. ( Visite of all this of all this places and the Oudayas museum.

Breakfat at your hotel and departure to Tangier via the Highway.

Breakfat at your hotel and transfer to the airport of Tangier according to your flight schedule.

End of our services

Hotels Included in the Prices by category :

All was exactly what we asked for

All in all the tour was exactly what we asked for and the driver and guides were very good at their jobs.
Meedle(?) was our driver for the day and he was on time… early in fact… dressed neatly and the vehicle was very well presented and the airconditioning was very appreciated on this 50 degrees day.
Mohammad was our guide for the morning and he was indeed very knowledgeable and managed to get us into the sites we asked for with out any long lines and missing the big tourist buses.
Fatima was our afternoon guide and she also was very knowlegdable and took us to a great restaurant for lunch.
I would recommend Pure Morocco and if I return again I would certainly use your services.

We enjoyed our tour in Morocco

The car was good—very comfortable for a passenger van. The only feedback I would give it to wash the windows every morning as we tourists are always looking out the windows at things (and sometimes trying to take pics)!! They weren’t very dirty but it would be a nice touch if they were totally clean starting out each day.
We loved our driver and have no complaints; the tour guides were all good. Our favorite day was the day in Chefchaouen and our guide that day also was the best.
We really appreciate the extra effort made by Mounir in organizing last minute tours for us and our family—the situation kept changing and he was very flexible and diligent at organizing things for us—even very late at night.
Yes, we would recommend Pure Morocco.

My visit to Morocco was most enjoyable

Both the bus and driver were excellent. The driver is to be congratulated on his ability to negotiate such a large vehicle through the narrow, winding streets of some of the places we visited.
Our guide, Mohamed Zeroual, is very knowledgeable and has excellent English. He was extremely pleasant and helpful and has the right personality for being a tour guide. Being a tour guide is not easy, but Mohamed made it appear to be so.
The whole Tour was extremely well organised and the places visited were very all interesting, intriguing and beautiful. Many were of very significant historical and social interest. Great attention was paid to details.
Hamid, the man who was helping out on the bus was very attentive to the passengers needing help getting onto and off the bus, as was Ali, the driver. Hamid also made sure we always had water when returning to the bus and he was also very careful with the luggage. All of which which was reassuring.
I definitely would recommend Pure Morocco. There is no doubt, the choice of places and things to visit was exceptional. 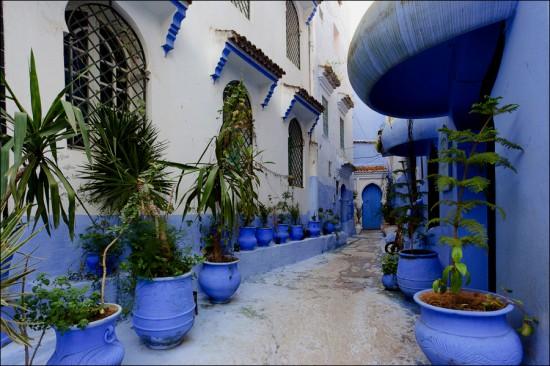 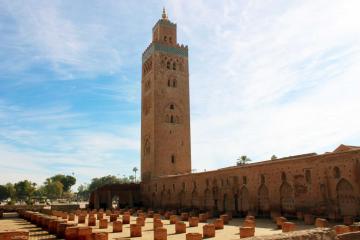 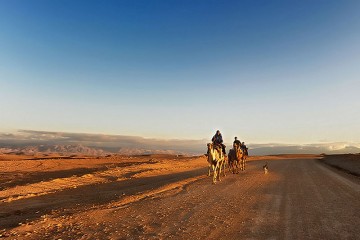 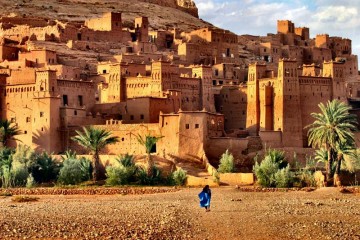 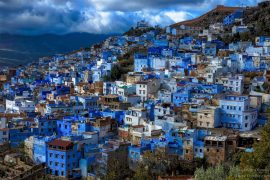 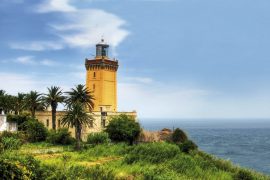 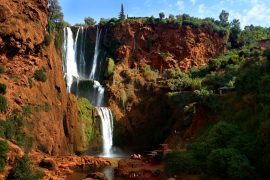 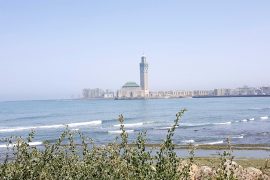 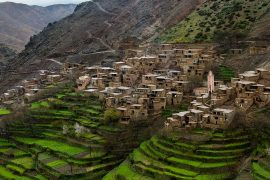